Board of Zoning Appeals

Be a Hero, Save a Hero

The Telecommunications Commission meets the third Wednesday of every month.
7:00pm in the City Hall Community Room (lower level).

719.01 BRECKSVILLE TELECOMMUNICATIONS COMMISSION (BTC); ESTABLISHMENT AND MEMBERS; TERMS.
(a) There shall be established a citizens' advisory commission entitled the Brecksville Telecommunications Commission (BTC). The membership of this commission shall consist of one member of Council to be appointed by Council for a term of two years, and in addition six qualified electors of the municipality not holding other municipal office or appointment who shall be appointed by Council. The members of the Commission shall receive no compensation. Those individuals currently holding appointment for any position of the Brecksville Cable Television Service Advisory Commission shall, upon the elimination of such Commission, immediately become members of the BTC in the same positions and for the duration of the same terms as previously held for the Brecksville Cable Television Service Advisory Commission.

(b) Those persons other than the Councilman appointed to the Commission shall be appointed for a term of three years. Unexpired terms shall be filled in the same manner as original appointments.

719.02 DUTIES AND POWERS OF COMMISSION.
(a) The Commission shall have the following duties and responsibilities:

719.03 COMMISSION RULES AND PROCEDURES.
(a) The Commission shall have the authority to submit proposed rules and regulations for the conduct of its business to Council for approval and, upon approval, shall have the right to hold hearings and make recommendations to any franchise grantee and to the educational and governmental communities on the coordination of the educational and governmental access channels. All such actions shall be advisory only. 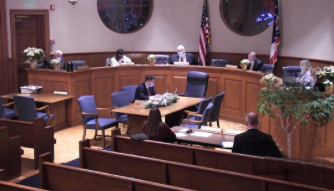 Please use the portal above to view Agendas,
Minutes and Members.